Welcome to the Funtley Village Society

The Welborne Plan was been declared 'sound' by the Government Inspector on 12th May 2015, therefore giving Fareham Borough Council the go ahead to consider development plans for the site.

The Inspectors full report can be found here

The Community Groups, including the Funtley Village Society are obviously hugely disappointed by this decision. The developers will now submit their plans for various parts of the development, and we will of course work with them to lesson the impact of the works on our residents and village. To date (as of Oct 2018) the plans still haven't been approved by FBC and no building work has begun on the site.

A press release was sent to the media as follows:

“We are naturally very disappointed by the Inspector’s decision. Fareham neither needs nor wants, development on the scale of Welborne, which will destroy almost 1,000 acres of open Countryside and high grade farming land, for what purpose?.

Residents were told by FBC (May 2011 – Special Edition of Fareham Today) that the rationale behind Welborne was to provide affordable housing for local people. That myth was exposed years ago when FBC were forced to admit, that such homes could not be “ringfenced” for Fareham residents. To compound matters, recent changes to the Welborne plan now allow the Developers to undershoot targets for the delivery of affordable homes, on viability grounds.

The traffic impact assessment work is both incomplete and we believe, fundamentally flawed (The HCC prediction that a mere 2% of Welborne traffic will head North on the A32 does little to generate confidence in their Transport model as a whole). There are no funded plans as to how capacity on the existing local road network/M27 can be increased to cope with the additional traffic generated by Welborne and the design for M27/J10 has yet to be agreed, let alone funded. Existing Fareham residents ought to prepare themselves for yet more traffic congestion, increased journey times and worsening air pollution.

Settlement buffers between Welborne and existing Villages are a derisory 50 metres, the downstream flood risk assessment to Wallington, Funtley & Titchfield has yet to be even started and FBC’s confidence that this will be a “sustainable development”, is now so low that even the sustainability targets, have been removed from the Welborne Plan.

The timely provision of infrastructure and its funding, remains as uncertain today as it was when the issue was first raised over 5 years ago and to make matters even worse, neither FBC nor the local Clinical Commissioning Group (CCG), can provide assurances that primary & secondary healthcare provision can cope with development on this scale. This includes not just the 5,500 homes at Welborne, but the further 4,500 elsewhere across the Borough and the yet further development that is planned across the wider QA catchment area.

What has now become abundantly clear, is the extent to which FBC are totally subservient to an organisation that most people in the Borough have probably never heard of namely the undemocratically constituted, Partnership for Urban South Hampshire (PUSH), for it is PUSH who have been setting the housing target figures.

In declaring the Welborne Plan “Sound” the Planning Inspector appears unfortunately, to have succumbed to what was no doubt immense pressure from his political masters and has allowed a deeply flawed plan, regardless of the consequences, when patently the Welborne plan is anything but sound.”

General Information of The Welborne Plan

The plan details the Councils ideas for the new town of 6500 new homes and a business park sited on the fields both sides of the A32 from Fareham to Wickham. The development will change the landscape for ever with 1,000 acres of open countryside consumed not for the housing needs of Fareham but for South East Hampshire. It will have an enormous impact on the residents of Funtley as well as the whole of Fareham and beyond, as our infrastructure and services are stretched beyond capacity to deal with the new development.  Many of the new planned services will not be built for many years, leaving new residents no option but to travel and use existing schools, GPs/hospitals, shops, refuse, leisure facilities and of course roads.

The development will take over 20 years to complete. 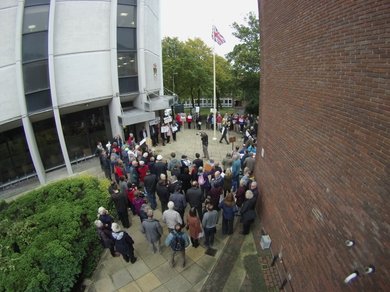 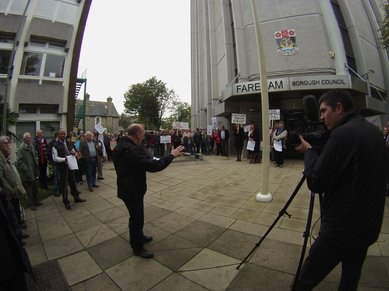 Pictures from the Public Demonstration held outside the Council Offices on 15th October 2014, to coincide with the start of the Welborne Hearing.

A video on U-Tube can also be viewed by clicking on the link here:

There are numerous interesting posts and discussions ongoing on the FaceBook site: 'Fareham - Countryside or More Housing? The Big Debate'.  Please join via this link to get daily updates:

Your Council and Government representatives are: